Belah'dian Knight Taxonomy: Ashkin (Damned) Description: Presumably once the elite warriors and perhaps aristocratic scions of Belah'dia, these unliving remnants walked once more in order to defend the temple they were buried within. This may have been intentional as an attempt to defend the temple, or a result of the bloody wars that saw the end of Belah'dia, as catastrophe and tragedy can bring corpses back to life without direct intervention. Perhaps these warriors represent a martial tradition that the founders of Ul'dah would go on to draw from in their creation of the Sultansworn. Capabilities: The Belah'dian knights were able to 'ossify' their crumbling bodies in order to strengthen their physical … END_OF_DOCUMENT_TOKEN_TO_BE_REPLACED 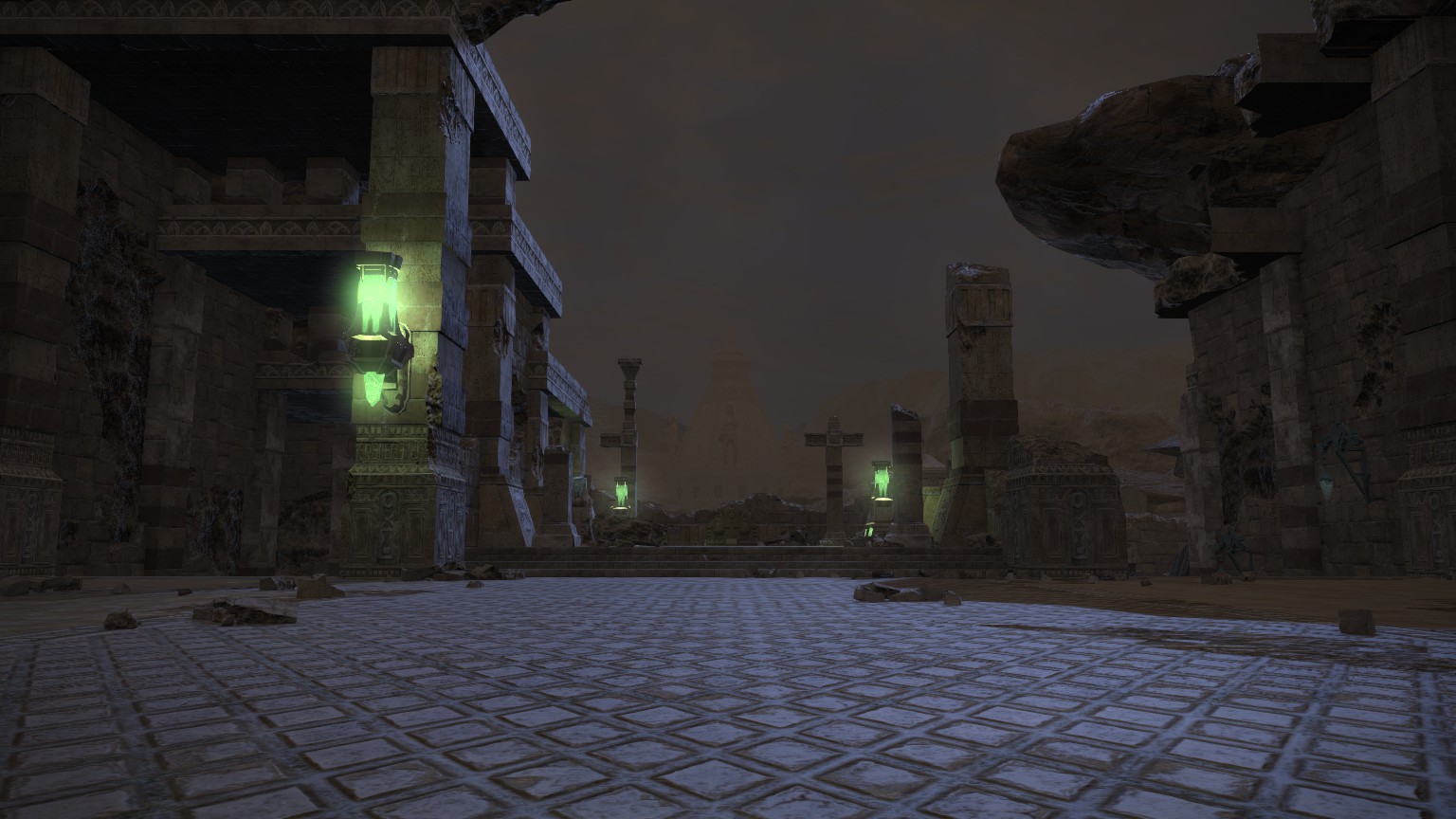 Excerpt from ‘The history of Thanalan, from Belah’dia to Ul’dah’ by Archon Niniri Niri.  The Temple of Qarn, after being made safe by the intervention of a party of trusted adventurers, was given over to the Order of Nald’thal and the Amajina & Sons Mineral Concern in hopes of excavating the valuable secrets of Belah’dia. Unfortunately the approved authorities were not the only ones eager to unearth the treasures of Qarn, and a number of amateur adventurers triggered the traps hidden within, trapping the researchers in the Temple. Most urgently among these captives was Nenekko Neko, the daughter of the Concern’s chairman. The Sun Terrace Qarn opened on a wide plateau of elaborately carved stone lit with blue aether … END_OF_DOCUMENT_TOKEN_TO_BE_REPLACED

From the archeological notebook of Archon Niniri Niri. Weaponry: The Flametongue: This sword found within Qarn is fairly standard in its structure, and appears to be a bastard sword, a blade that combines the balance and versatility of a longsword with the heft and length of a greatsword. The name flametongue is an expected one, as Azeyma herself is a deity of flame, and so this blade was likely used by one of her followers, likely a guardian of her temple. Etymology Notes: Flametongue is a common name for swords that boast a measure of flame magic across fantasy, from the wider Final Fantasy franchise to Dungeons & Dragons. The Boar's Bane: A common bardiche in structure, these axes were invented by Elezen tribes … END_OF_DOCUMENT_TOKEN_TO_BE_REPLACED

Temple Bat Taxonomy: Cloudkin (Bat) Description: Bats reside within the dark places of the world, roosting in caves and other secluded locales. It is common knowledge that they are nocturnal creatures, but more dedicated research by the scholars of the realm has uncovered that they are capable of feats of extremely keen hearing and a technique called echolocation. Although most bats feed on insects and fruit, folklore has long held that some of them instead feed on blood. These specimens have obviously made their roost in ruins of the temple. Capabilities: Much to the chagrin of this author, it was discovered by the research team that these particular bats are fully capable of the blood-draining abilities ascribed to … END_OF_DOCUMENT_TOKEN_TO_BE_REPLACED 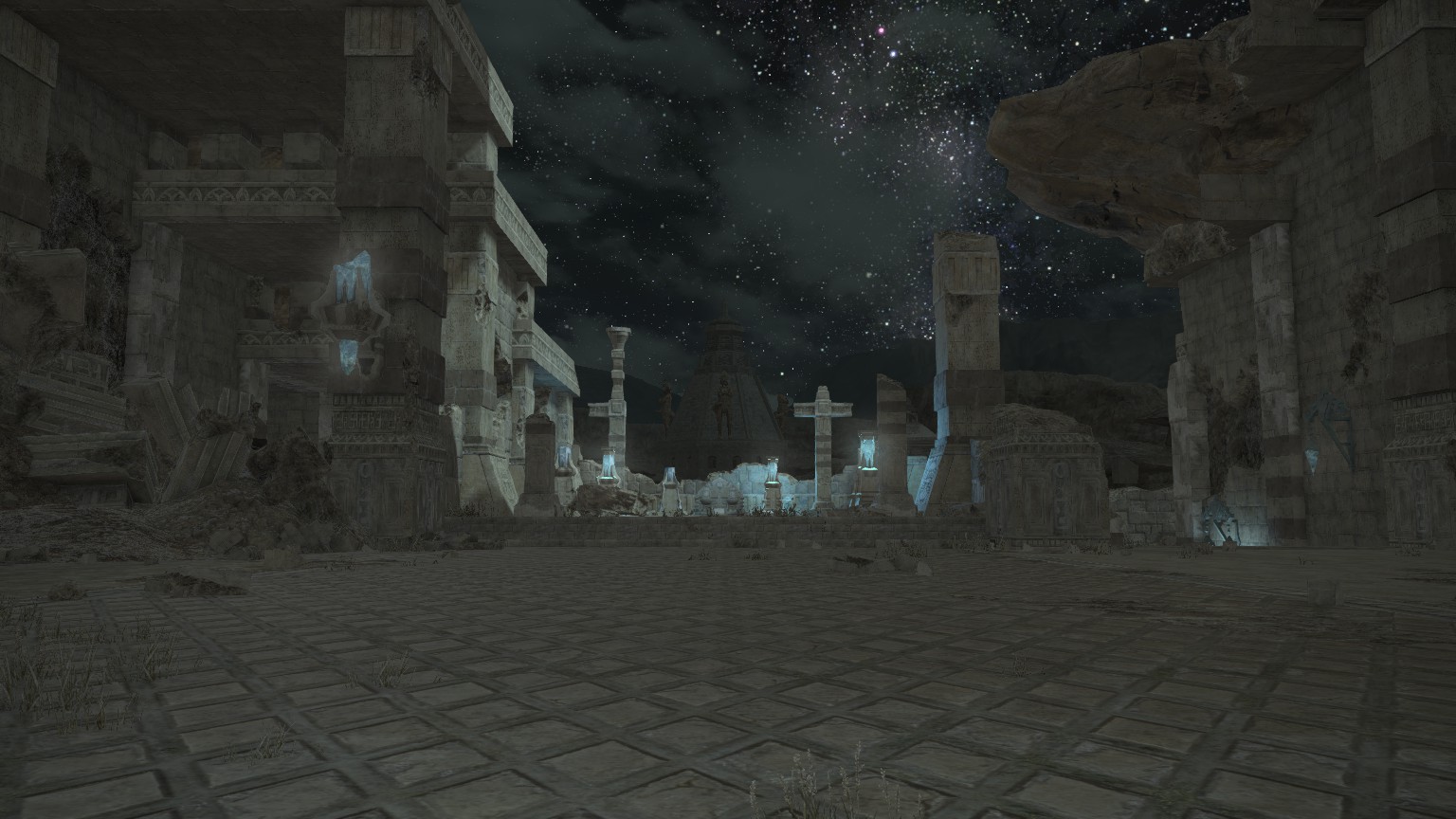 Excerpt from ‘The history of Thanalan, from Belah’dia to Ul’dah' by Archon Niniri Niri.  One of the most impressive ruins of the early Sixth Astral Era, Qarn is any archeologist or historian's dream, and so this author felt extremely grateful to get the chance to poke around after it was cleared by adventurers. Qarn was a temple of Azeyma, goddess of the sun, built by Sultan Tatamefu II of Belah'dia that remained important to members of the Sultanate in the years since. The temple was undergoing a series of expansions underground, presided over by Sultan Lalafuto IV before internal strife and monetary issues forced their cancellation, followed soon after by the fall of Belah'dia. The ancient kingdom fell to a massive civil war waged … END_OF_DOCUMENT_TOKEN_TO_BE_REPLACED