The Diremites Taxonomy: Vilekin (Diremite) Description: Creatures with a strict social hierarchy not unlike an ant, diremites live in nomadic colonies that devour all the food in an area and then move on. There were representatives of the lowest rank of the hierarchy in the Deepcroft this time, mitelings, a caste that focuses on performing labor for the colony. There were also members of the middling rank of the diremite species, simply called diremites, who are the soldiers that act as guards to the colony. Finally there were banemites, egg-laying females that typically lead diremite colonies. Demon Pawn Taxonomy: Voidsent (Demon) Description: Commonly referred to as ‘reapers of souls’ by the … END_OF_DOCUMENT_TOKEN_TO_BE_REPLACED 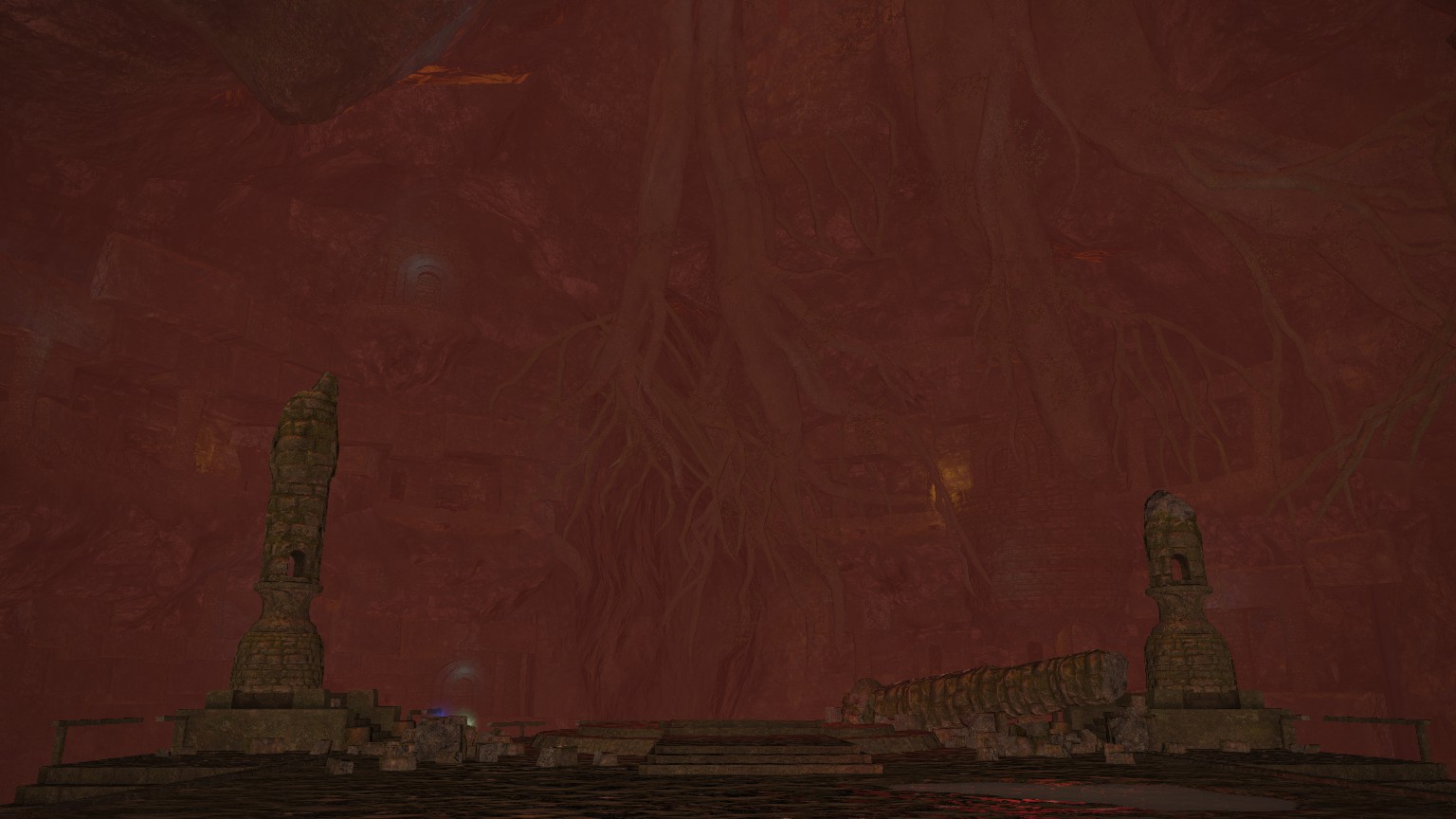 Excerpt from ‘The history of the Black Shroud, from Amdapor to Gridania’ by Archon Niniri Niri. The events that struck the Deepcroft a short period after the Lambs of Dalamud were slaughtered in its tunnels began in a small rural village in the foothills of Alabathia's Spine and ended in the ancient ruins of Gelmorra beneath the Shroud, provoking a potential disaster of regional proportions. The Deepcroft Proper The central room of the Deepcroft is a colossal vaulted chamber. The walls are populated by antechambers not current accessible by the main room, and which likely contain the remains of Gelmorra’s aristocracy and royalty. Indeed, reports on the Deepcroft discuss the emblazonment of the subterranean city’s crest. This crest … END_OF_DOCUMENT_TOKEN_TO_BE_REPLACED

Lunar Golem Taxonomy: Soulkin (Golem) Description: Golems are beings of stone animated by magic, with rumors suggesting that they may be easier to animate in the path of a calamity, although any real research will demonstrate that this is not the only time they are possible to create. These particular creatures names draw from the fact that they were animated by the energies of Dalamud. Dark Matter Roselet Taxonomy: Seedkin (Flying Trap) Description: Deeply predatory seedkin, flying traps rely on the use of their brightly colored petals to lure in prey which is then stuck to these petals by a secreted adhesive, and drained of nutrients by the plant’s roots. They are also capable of more direct combat, … END_OF_DOCUMENT_TOKEN_TO_BE_REPLACED 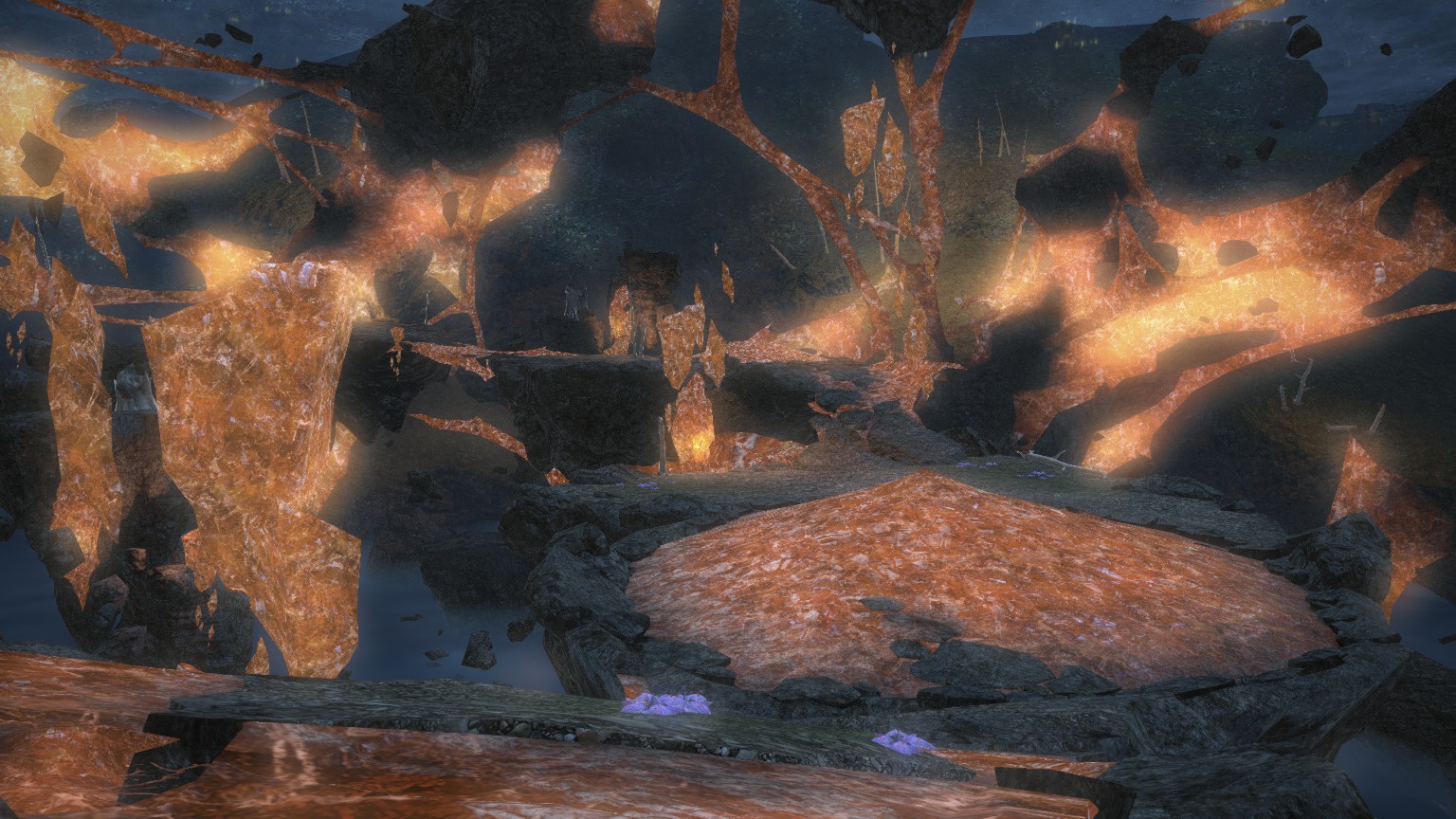 Excerpt from ‘Records on the Traverse of Dalamud’s Ruins – A Handbook for Scholars of Allag’ by Archon Niniri Niri. It was at the zenith of ancient Allag, during the second reign of Xande, the revived Emperor, that the elder primal Bahamut was captured and ensorcelled within a colossal metal sphere containing vast apparatus aimed at imprisoning the primal and draining its power. This sphere would later go on to gain the name Dalamud, likely a derivation of Bahamut’s own name by later peoples, and was intended to generate power enough not only to sustain the Empire, but to bring destruction upon it by the madness-invoked apocalyptic designs of the Emperor. The Warrior of Light, in conjunction with the Scions of the Seventh Dawn and other … END_OF_DOCUMENT_TOKEN_TO_BE_REPLACED

Demonstool Taxonomy: Seedkin (Funguar) Description: Funguar such as these are considered delicacies in Eorzea for their surpassing texture and taste, although this author struggles to believe it can stand up to the humble yet utilitarian function of the archon loaf. Funguar are widespread across the world, but thrive mostly in forests and moist caves. The name demonstool may be a reference to the malevolence of these creatures, or perhaps the voidsent's influence on the city. Wamoura Taxonomy: Vilekin (Wamoura) Description: Vile creatures, regarded often by Gridanians as symbols of decay and disaster due to their foul existence. wamoura feed using a fanged proboscis, which it uses to drain the fluids of … END_OF_DOCUMENT_TOKEN_TO_BE_REPLACED 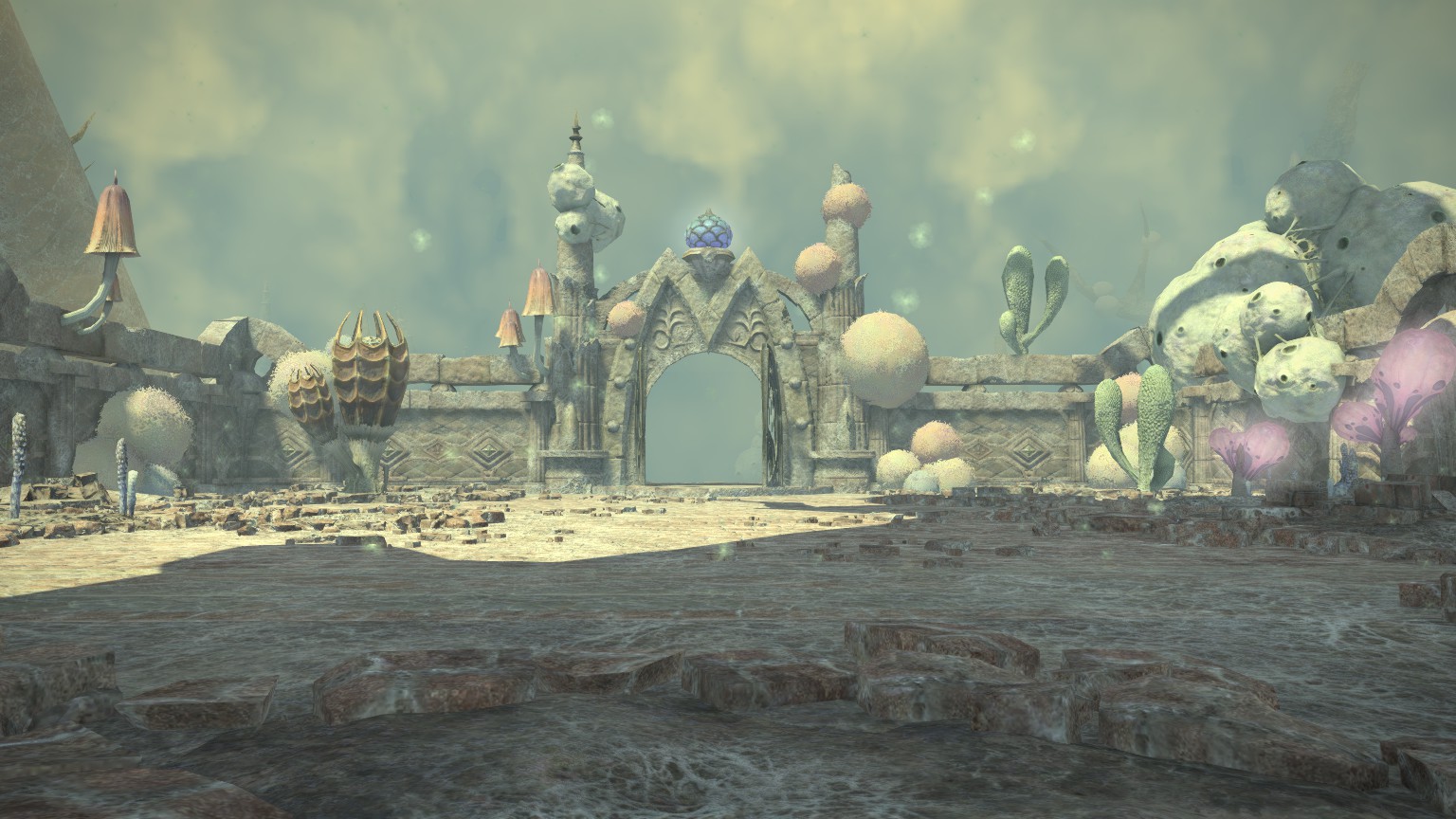 Excerpt from ‘The history of the Black Shroud, from Amdapor to Gridania’ by Archon Niniri Niri. Please refer to the entry on Amdapor Keep for further history on the city-state of Amdapor. In the wake of the fall of Amdapor Keep, the Amdapori capital was left open to the roving voidsent army of the Mhachi. Thus did the forces of Mhach implement the final part of their invasion plan, summoning a grand noble of the voidsent who went by the name Diabolos. Though the Mhachi were mighty in their magical strength, and their voidsent servants were innumerable and powerful in their own right, they had underestimated the centuries of preparation undertaken by the Amdapori and the strength of their magics. As the dark armies of Mhach approached … END_OF_DOCUMENT_TOKEN_TO_BE_REPLACED

Altered Wailer - (Demon) Taxonomy: Voidsent (Demon) Description: Commonly referred to as ‘reapers of souls’ by the people of Eorzea, demons are particularly rife throughout the folklore of Hydaelyn. It is a common opinion amongst scholars of the Void that demons were once members of the spoken races of the thirteenth shard, corrupted into mindless soldiers of dark entities when the shard was flooded by the Void. These creatures were once Wood Wailers of Gridania, who were tragically mutated by the perverse rituals employed by the voidsent of the Manor. The Wood Wailers are an organisation of lancers within Gridania that date back to the city-state’s founding. Garrisoned across the Shroud in watchtowers and … END_OF_DOCUMENT_TOKEN_TO_BE_REPLACED 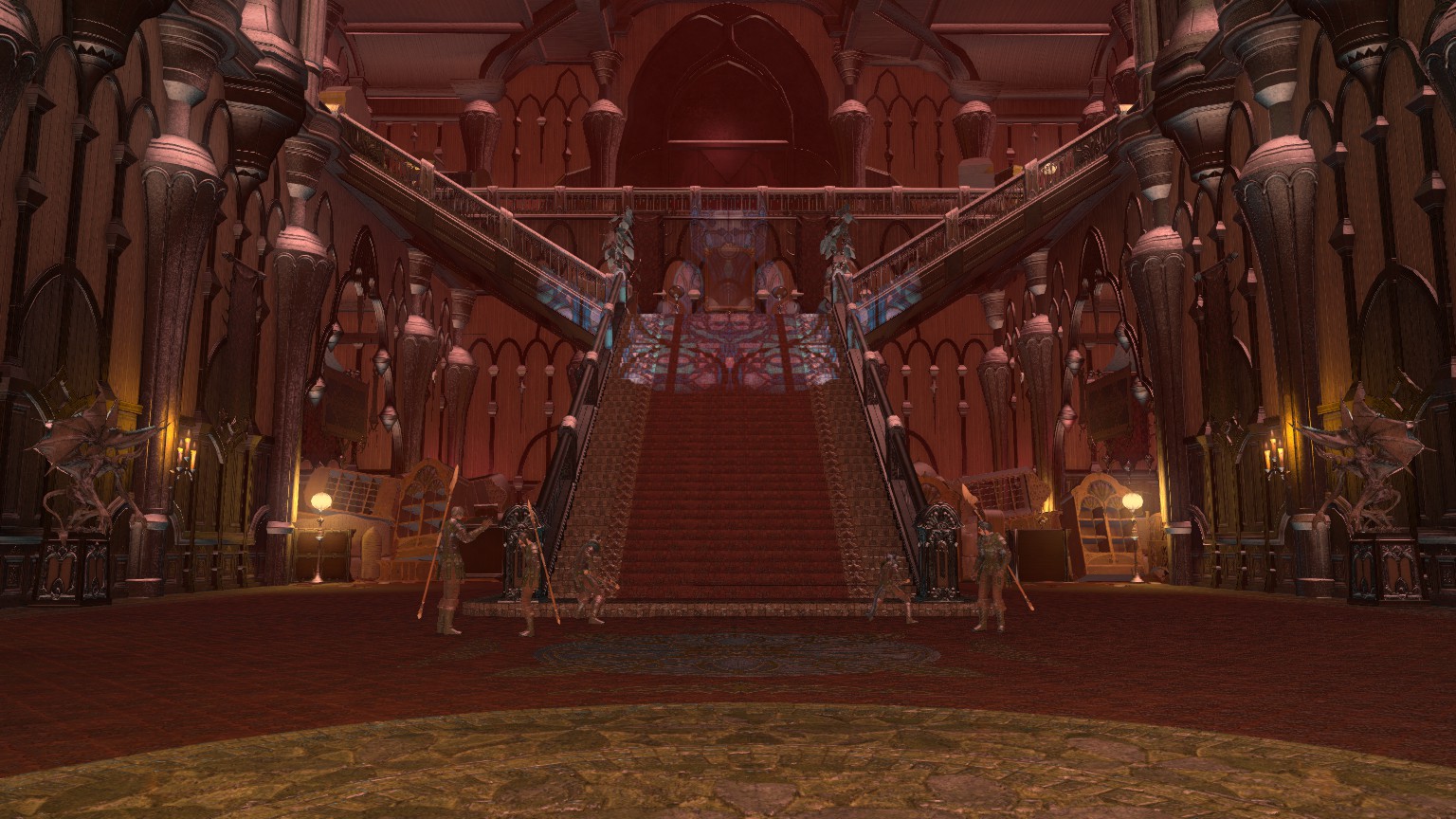 The dark machinations of Lady Amandine Dartancours had dire consequences for her residence, as consorting with voidsent so often does. The forces of Gridania discovered this when an entire squad of Wood Wailers went missing inside. The noblewoman's rituals had profaned the site to such a degree that over time the manor became re-infested with the dark spawn of the Void. The Wood Wailers, for context, are an organisation of lancers within Gridania that date back to the city-state's founding. Garrisoned across the Shroud in watchtowers and settlements, the Wood Wailers extend patrols across the woods to keep the peace and protect the compact between Gridania and the elementals of the Twelveswood. The masks of the Wood Wailers are intended to … END_OF_DOCUMENT_TOKEN_TO_BE_REPLACED

Tome Request - William Tome Retrieved - 'The history of the Black Shroud, from Amdapor to Gridania’' by Archon Niniri Niri One cannot truly discuss the modern Black Shroud or its inhabitants without mention of the rulers of Gridania - the eternally mysterious padjal. In effect a subspecies of the midlander hyurs, the eternally-young individuals are created by the blessing of the elementals and certain bloodlines seem to be especially commonly blessed with padjal births, typically becoming nobility by virtue of this. Padjal have been a prominent feature of Eorzea during the Sixth and Seventh Astral Era. The History of the Padjal - The origin of the Padjal is found in the subterranean city of Gelmorra, a mixed Hyuran-Elezen society … END_OF_DOCUMENT_TOKEN_TO_BE_REPLACED

The Lambs of Dalamud Taxonomy: Spoken (Various) Description: The Lambs of Dalamud are a vile cult in service to their own divine perception of the lesser moon, Dalamud. The origin of the cult is shrouded in mystery, and although most believe them generated by the mass hysteria produced by the oncoming Seventh Umbral Calamity or planted by Garlean subversives, some scholars hypothesize an older origin, perhaps even dating back to the Fourth Astral Era, known as the Fall of Civilization, spurred on by a mingling of the relatively recently fallen Allagan Empire's history with the religious renaissance of the era. The Lambs hold that Dalamud is a divinity in and of itself, the ferocious hound of the moon goddess Menphina, … END_OF_DOCUMENT_TOKEN_TO_BE_REPLACED